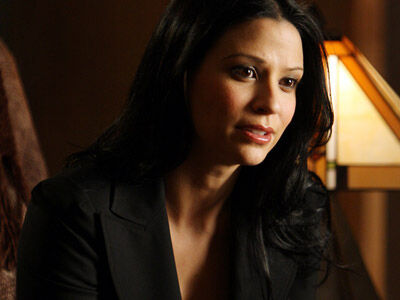 Amita Ramanujan (portrayed by Navi Rawat, known for the OC, Burn Notice and being the Moen spokesperson) is an astrophysicist and computer programmer who frequently works with Charlie at school and on cases for the FBI.

She is the best programmer Larry Fleinhardt and Charlie know and is an expert on asymptotic combinatorics.

As revealed in "Tabu", she built her first computer at the age of 13. Series writer Sean Crouch wrote “First Law” to explain Amita’s interest in computers.

Amita has been a player of a MMORPG game called "Primacy" since she was an undergraduate (age 19), which allowed her to provide unique insights into a case involving a murderer who was a jealous gamer.

In the first season, she received a doctorate in computational mathematics with Charlie Eppes as her thesis adviser at CalSci, and as she had completed her graduate work under the supervision of Charlie, she decided to pursue a second doctoral degree in astrophysics at CalSci with a new thesis adviser, Dr. Kepler.

In season 3, she becomes a professor at CalSci after a difficult decision between other University offers (Harvard) and leaving Charlie and LA.

To her surprise, Amita wins the 2006 Milton Prize for her dissertation on combinatorics, which Charlie, a previous recipient, presented to her.

Amita is currently doing research with Dr. Mildred Finch, the new Chair of the CalSci Physics, Mathematics, and Astronomy Division and an experimental neutrino astrophysicist; Dr. Finch put her on tenure track and appointed her chair of the curriculum committee.

In [Episode] Dr. "Millie" Finch says harsh words to Amita about her needing to act like a professor and be more than Charlie's assistant and even states that she dresses like a kid. Mildred disapproves of her dating her former thesis adviser.

She also works with Larry Fleinhardt on the DØ experiment search for the Higgs boson.

Amita was born in California and her family was from South India, speaking Tamil.

In S.5 E.17 First Law the A.I. device, Bailey, recites Amita's birth history: "Amita Ramanujan, born June 10, 1975, at Cedars-Sinai at 6:31 a.m. Birth certificate not witnessed and dated until June 12, 1975, when a name other than Jane Doe Ramanujan was entered into the public record."

She decides to use the prize money from her 2006 Milton Prize to fund a trip to India with her grandmother in an attempt to become attuned with her heritage and help with the education costs of two Indian girls she met through one of Don's cases. Amita believes she is close to her parents but it is revealed they don't have the relationship Don & Charlie have with their father. In many episodes though have Amita making plans for their visit but they have to cancel last minute. Their relationship consists of formality, phone calls and public life. They initially tried to arrange a marriage for Amita but it fails. They also try to set her up several times with prospective husbands.

She mentioned in the pilot episode an arranged marriage (she described her would-be fiancé, a banker from Goa, as "a total ass") but it was unclear if she was serious or teasing Charlie and Alan. It is later revealed in "Pay To Play" that the Banker from Goa has married someone else.

In [episode] her parents finally come to town to have dinner with Charlie and his father Alan, but arrange a drop-in by a handsome and successful friend Amita has known since childhood who is revealed to be gay! Before leaving they apologize to the Eppes, stating Amita has chosen well.

Her interest in Charlie wouldn't be so compounded if only he could not see everything in the world in mathematical categories. On the other hand, she deeply admires his work, and is filled with awe after touching a chalkboard full of his elegant equations.

In Season 2, after Charlie became concerned with her association with Dr. Penfield, she stated she had no time for a serious relationship because of her graduate work on astrophysics. She assured Charlie that her interest in Penfield was only of the intellectual nature.

In the season 5 finale, "Angels and Devils", Charlie proposes to Amita at the end of the episode after she had been kidnapped at gunpoint in front of him by the leader of a cult. After Don and the rest of team get her home safely, Charlie proposes to her saying that he has learned this past year (5th season) that life turns on a dime and he doesn't want the things that matter (Amita) to disappear because he waited to see what could happen. Her response is not heard as the episode ends, but it is implied by her saying that she loves him right before he proposes that she will say yes. In the first episode of season 6, Charlie and Amita announce to Alan and Don, Charlie's father and brother, that they have decided to get married. Amita and Charlie attempt to find a wedding date that fits them and their families' schedules, finally accepting Alan's suggestion of using his and Margaret's anniversary date as Amita and Charlie's wedding date.

As mentioned in the Season 6 episode, "Hydra", Amita would like to have three children with Charlie. They later admit that they are far too busy for children at this point in their lives, however.

Community content is available under CC-BY-SA unless otherwise noted.
Advertisement